Apart from the information we can gather from the media we are, of course, in contact with our partners in the camps and our friends in Lebanon, to monitor the situation and the effects of the protests, widespread since October 17th, on everyday life. These protests demand the end of corruption, of rising living costs and of waste. In addition, they condemn the lack of essential services and the confessionalism that paralyses the economy and the political system.

It is impossible to guess how this situation will evolve politically but it is certainly very dangerous given the country’s fragile equilbrium.

The following link  https://ulaia.org/new/pdf/kassem situatio On Nov 27.pdf is to an email we received from the director general of Assumoud which highlighted the 30% rise in the price of essential goods, such as groceries and petrol; the possible devaluation of the Lebanese pound and its dramatic fall against the dollar; and the limit imposed by the banks on the amount of money that can be withdrawn.

The latest news suggest that there is rampant inflation  and a total paralysis of trade leaving supermarket shelves unstocked and shops closed. The situation for the families of Palestinian and Syrian refugees is devastating. For uptodate information  please follow this link  http://nena-news.it/category/inglese/ 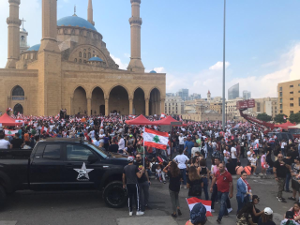 The financial crisis in which Lebanon has found itself since the end of December has exacerbated the protests that began in October.

Till recently the central bank of Lebanon managed to maintain the system by attracting the savings of Lebanese abroad, offering them Government bonds at a very lucrative interest rate (up to 20%). This has meant that the Government was spending half of its revenue to pay these interest rates. When the public debt went through the roof, savers were alarmed and stopped investing, which led to the illiquidity of the banks and the subsequent collapse of the system.

The banks can no longer provide the valuable currency required and only dispense Lebanese pounds at preestablished limits; however, since commercial transactions have to be paid in dollars (primary commodities such as petrol, pharmaceuticals and wheat) a black market has developed in which the dollar, as we write, is worth 2020 Lebanese pounds

Moreover, for remittances from abroad in dollars the banks offer an exchange rate of 1507 Lebanese pounds to the dollar (a value at which the dollar has been pegged for more than 20 years) This amounts to a 30% devaluation of the currency, which affects all  strata of society and particularly those like the Palestinians who, as we know, depend on the remittances of relatives abroad for survival.

salaries have been reduced and jobs scaled back  ( this means that some people are only receiving 70% of their regular salaries for working the same number of hours, while others have had their working hours reduced and consequently their wages).

In December 2019 we sent out an appeal from Assumoud for donations to help the Palestinian families face these difficulties. Your generosity enabled us to transfer 1,800 euros on the 27th December. A further 1,340 euros in cash was delivered on January 2nd 2020, thanks to a team from COI, the Italian Orthodontic Centre, who have been running dental projects for Assumoud in Lebanon for many years.

A  final transfer will be made when the appeal closes, but the director general of Assumoud has already sent a message expressing his gratitude to all of you who have made donations, to which we would like to add our thanks for the trust put in us as intermediaries.