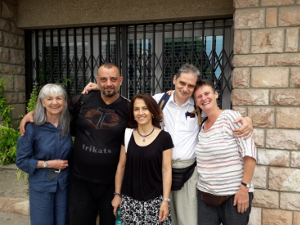 Sunday 10 March 2019 at the Centre for Education at the Citadel of Assisi, the two psychologists Mohamed Orabi, Palestinian, and Liliane Younes, Lebanese, will present their dissertations at the end of their four years of study. On this occasion,  it is Mohamed who is symbolically breaking down the frontiers referenced in the title of this project in which he has participated, ‘Band without Borders’, financed by the ‘8xMille’ funds of the Waldensian church.

Thanks to the sponsors of “Music and Resilience” and to the same Centre for Education who sponsored Liliane, the two students, the only foreigners on the course,  have been given the opportunity to follow a path that has led to a truly rewarding exchange with the teaching staff and their 130 fellow students on all levels:  scientific cultural and, not least, human.

The indefatigable tutor in these four years has been Deborah Parker from  the association Prima Materia. Here is one of the most significant observations from her report: “Mohamed and Liliane’s clinical knowledge and experience, with particular reference to the intervention strategies for young people and families from marginalised and/or deprived communities, assume a crucial and timely importance at a moment when music therapy and other such disciplines are looking into the clinical and psycho-social adjustments needed to face the sufferings of the asylum seekers and refugees in Europe.”

In these four years there have been many occasions which have provoked debate on the discrimination meted out to the Palestinians in Lebanon, a  situation not nearly as well-known as that of the Israeli occupation of Palestine. Thus, it is certainly music therapy, but it is also a window on diverse problems, which have long  remained unvoiced, perhaps because of the inability to resolve them.

Our project finishes here. It has reached its aim, which is to enable the recipient NGO, with the professional support of Mohamed and Liliane, both to update the current practitioners and train new ones.

This is our fervent hope.